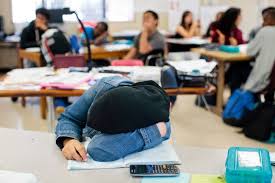 There has been a debate about whether or not high school should start as early as it does.  Many citizens think that teenagers will benefit more from a later start to the school day. Students come to school early in the morning without eating breakfast or being fully awake.

The benefits of a later start day are argued to reduce health-related issues related to a lack of sleep, reduce caffeine dependence, reduce motor vehicle accidents, allow students to cope with their academic responsibilities, and boost academic performances.

Older students at the school have different opinions about the later start time.  Senior Kennedy Cullen said, “I play sports outside of school,so if school started later it would also end later so I wouldn’t be able to make it to practice on time. I also have a job as well that I go to right after school, and if school ended later I wouldn’t be able to get as many hours in.”

Not only would this change affect students, but it would also affect the parents of these students. When asking a mother of an Orchard Park senior she sayid,“I would enjoy the time change because it would be closer to the time I have to go into work. I would be able to sleep in later and give my kids rides to school.”